Please join us for a late opening and Finissage of Moving Cities, and see The Old Chapel by night.

View the mesmerising artwork of Jeanette Barnes and Helen Shulkin, transporting us to other dimensions while DJ Tim Hall plays music inspired by the energy of the city.

And don’t miss the tasty drinks on offer with thanks to Antic London and Brick Brewery! 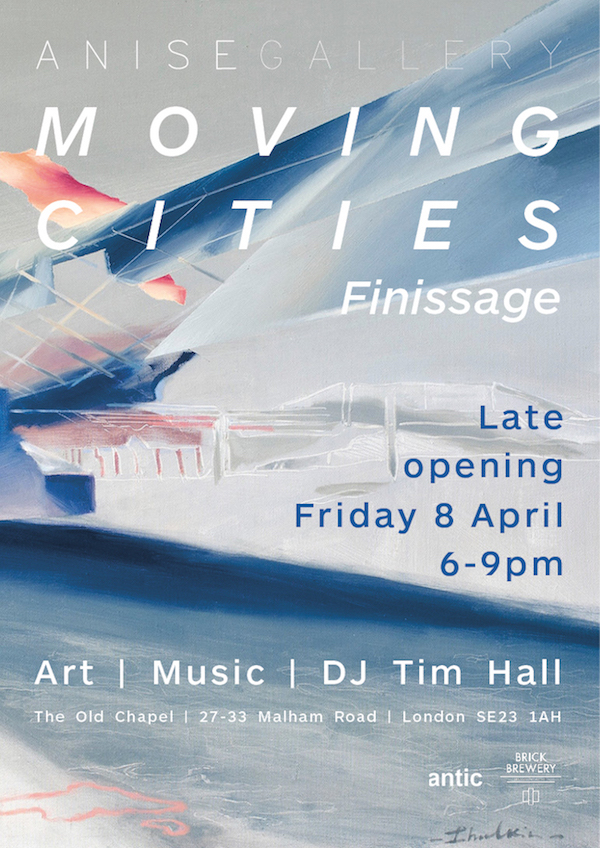 We were delighted to welcome Jeanette Barnes to lead our Drawing the City workshop.

Using colour, scale and layering, drawing from film, we captured the energy and motion of our bustling cityscapes, with the resulting drawings full of atmosphere and life.

Thank you to Jeanette and all those who attended! 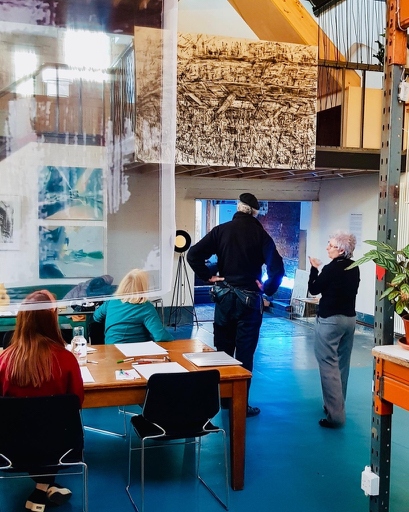 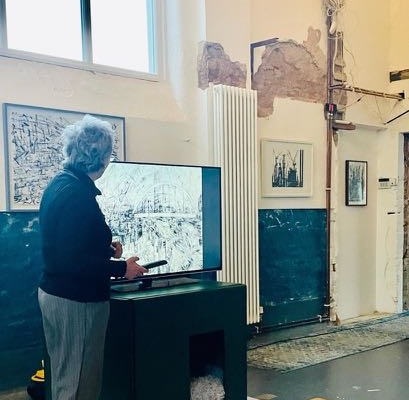 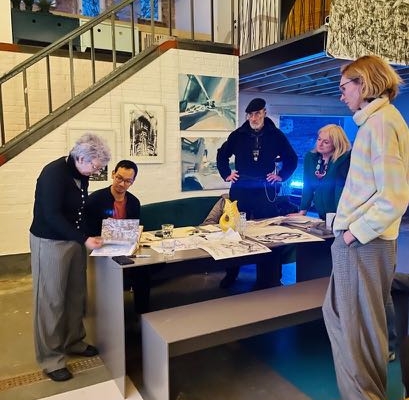 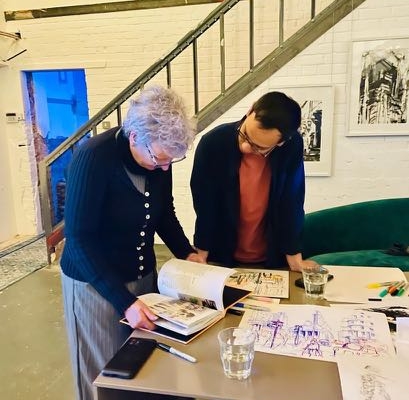 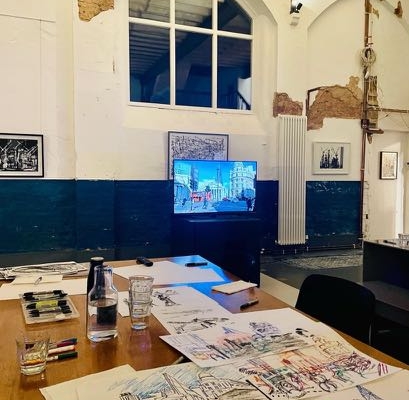 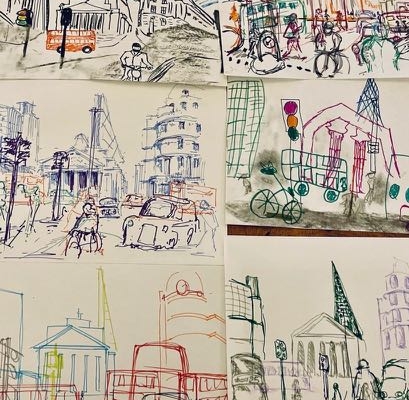 Join us at The Old Chapel for an afternoon of music, art and delicious food!

Prepare yourself for a musical feast as the Wild Arts Quartet present a 50 minute set of film music by Philip Glass, Arvo Pårt, Gregorio Allegri and more, with Ben Baker and Iréne Duval on violins, Jordan Bak on viola, and Orlando Jopling on cello.

We will also be joined by the wonderful London Basque Kitchen who will be serving up some delicious nibbles especially chosen to accompany the music and if that is not enough, there will also be the chance to have a sneak preview of our forthcoming exhibition ‘Moving Cities‘.

Drinks and canapés will be served from 4pm. The quartet will start at approx 4:45 and there will be plenty of time after to speak with the musicians themselves, view the art work and have another enjoy another tasty morsel from London Basque Kitchen.

The event will take place in Anise Gallery’s new home, a recently converted 19th Century zion chapel in Forest Hill, SE23. The surroundings promise to do the music the justice it deserves!

We hope you can join us for our inaugural event at The Old Chapel. Everyone involved in this event is doing it for the love of music, art and food – we have no additional funding so unfortunately we will only be able to run this event if we sell enough tickets. Please therefore share this with like-minded souls and join us for an inspiring beautiful and tasty afternoon! We will of course keep you updated on ticket sales and as soon as we know that we can run the event for definite you will be the first to know!!

Since winning 1st Prize at the 2016 Young Concert Artists International Auditions in New York and 3rd Prize at the Michael Hill Competition in New Zealand in 2017, Benjamin Baker has established a strong international presence.

Described by the New York Times as bringing ‘virtuosity, refinement and youthful exuberance’ to his debut at Merkin Concert Hall, he is much sought after as soloist and chamber musician.

Recent highlights include regular appearances at Wigmore Hall and on BBC Radio 3, his debut with Scottish Chamber Orchestra at the East Neuk Festival and with the Christchurch Symphony Orchestra in NZ, alongside solo recordings with the BBC Concert and Royal Philharmonic Orchestras.

Praised for her infinite delicacy (Le Populaire du centre), astonishing virtuosity (Revelation Classiques, Prades) and her mastery of phrasing and of the dramatic dimension(Diapason), Irène has won multiple international competitions and is an active performer of concerti, recitals and chamber music.

Irène has appeared frequently as a soloist both throughout her native France and abroad. Her engagements have included performances at the Philharmonie de Paris, Théâtre des Champs Elysées, Salle Gaveau, Dresdner Kulturpalast, Wigmore Hall, Les Folles Journées in Japan.

In addition, Jordan Bak is a member of the celebrated New York Classical Players and is a featured artist for WQXR’s Artist Propulsion Lab.

A conductor, cellist and collaborator, Orlando Jopling combines a deep knowledge of orchestral and operatic repertoire with a thirst for new music and discovering new composers. 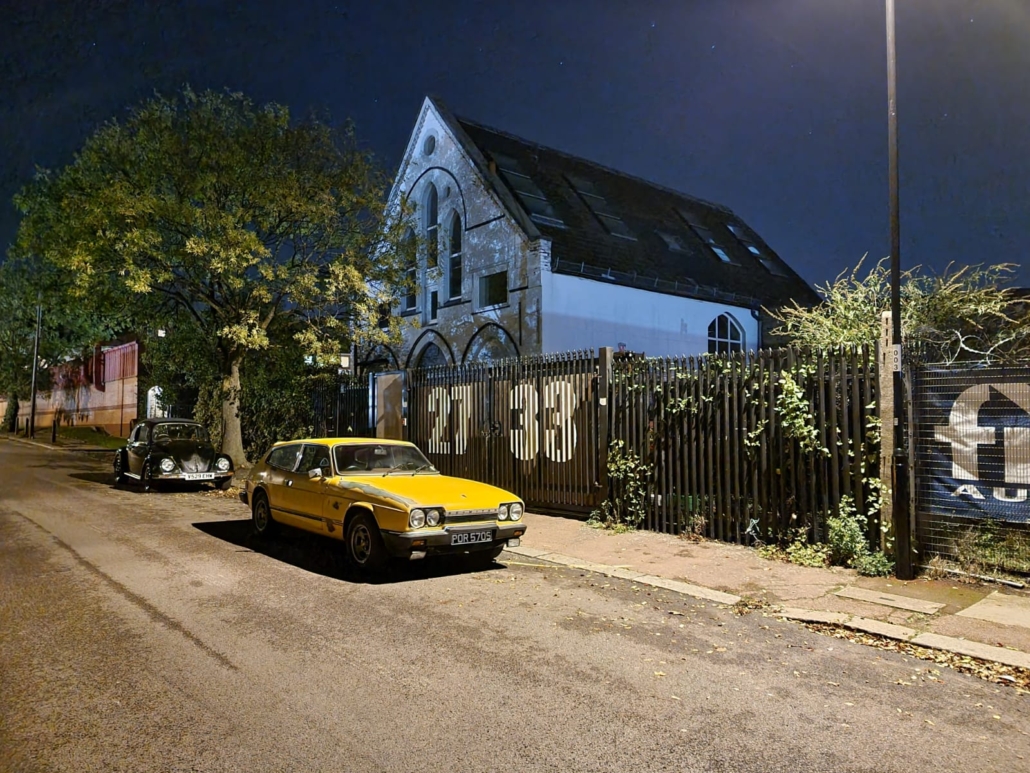 For the London Festival of Architecture 2021, Anise Gallery and AVR London present Work Home. Play Home, a film exploring how we create workplaces that are optimised for, and care for, a work-life balance.

To celebrate the launch of AVR London & Anise Gallery’s new creative home, join us at 6 David Mews for a series of live screenings of Work Home. Play Home, followed by short talks from a selection of industry experts.

There will be 4 screenings throughout the afternoon followed by a short talk and Q&A from one of our experts.

Please use the links provided to book the time slot that you wish. Each session is expected to last around 45 minutes. Places are very limited to ensure a safe and comfortable environment for everyone, so make sure you book early! 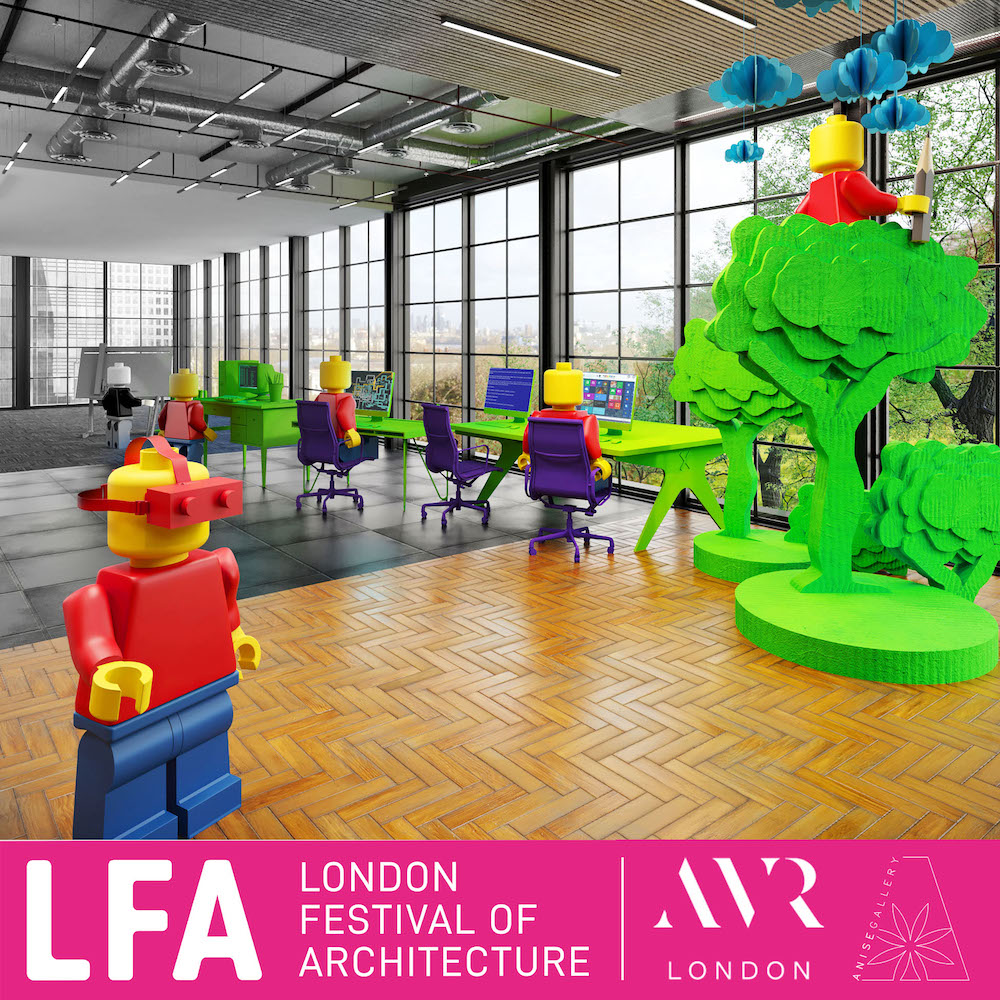 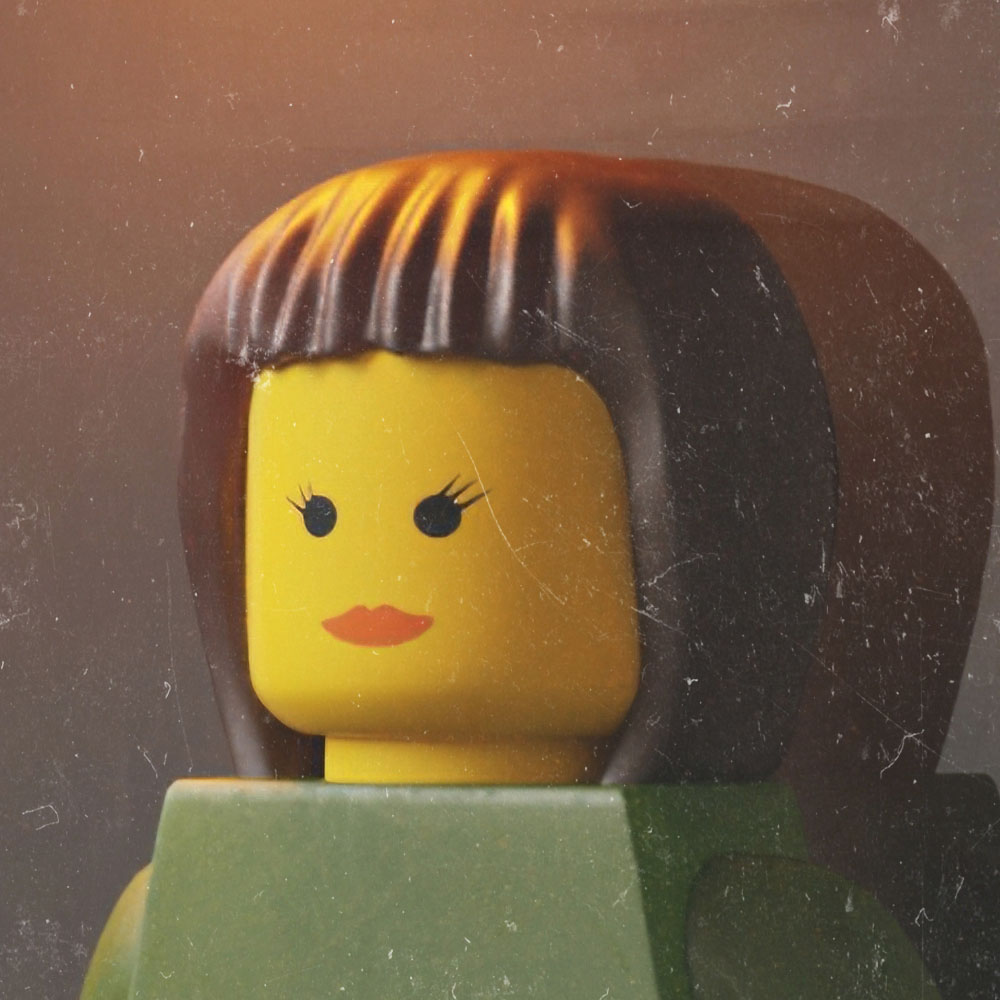 Amy Frearson is a London-based journalist and editor specialising in architecture and design. She is editor-at-large for Dezeen, the world’s biggest and most influential design website, and a regular contributor to magazines including Elle Decoration, Grand Designs, Icon and Design Anthology. She is also co-author of All Together Now: the co-living and co-working revolution, published by RIBA Books. Before moving into journalism, Amy worked in architectural practice for five years. She holds a master’s in architectural history from The Bartlett and a degree in architecture from Kingston University. 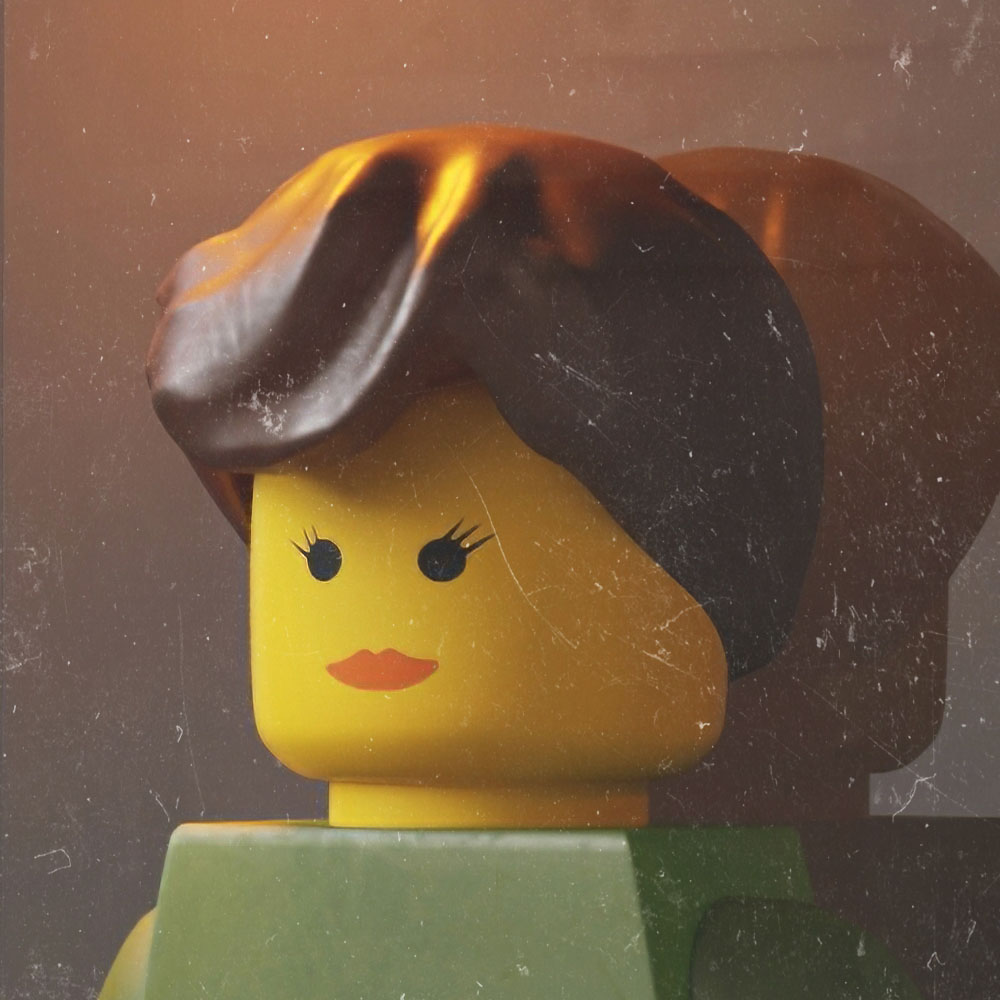 Sarah Yates is a Researcher at London’s leading built environment organisation, New London Architecture (NLA). She studied art and architectural history at Leeds University and then undertook an MA in Curating Contemporary Design at Kingston University, where she focused on curating architecture outside of the traditional museum environment.

Sarah has worked as a freelance curator, editor, researcher and programme manager for heritage and built environment organisations including English Heritage and Open-City, as well as NLA. Since 2006, she has co-authored major reports, most recently The Changing Face of London and WRK/LDN: Office Revolution? 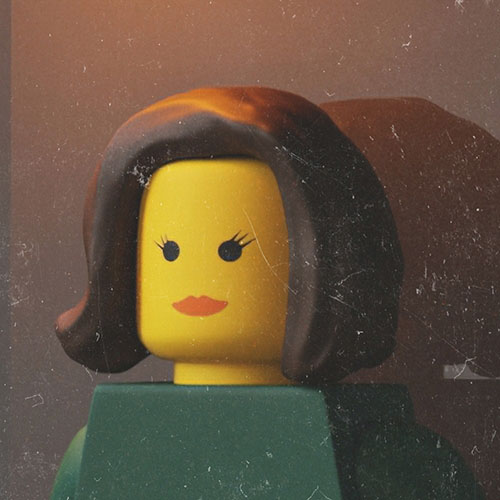 Catarina is an associate at Jonathan Tuckey Design, focusing on the reuse and adaptation of existing buildings towards sustainable regeneration. Since she joined the studio in 2013, she has worked on a wide range of projects at different scales, including the Gasholders Building in King’s Cross, fashion boutique Egg’s outpost at Dover Street Market, and the practice’s own new office building in Kensington Olympia, which has been converted from an existing Victorian pub.

Catarina obtained her Masters in Architecture from Universidade Autónoma de Lisboa in Portugal, and has always been an enthusiastic traveller, working in Slovenia, Sweden and Switzerland, before joining Jonathan Tuckey Design in London. 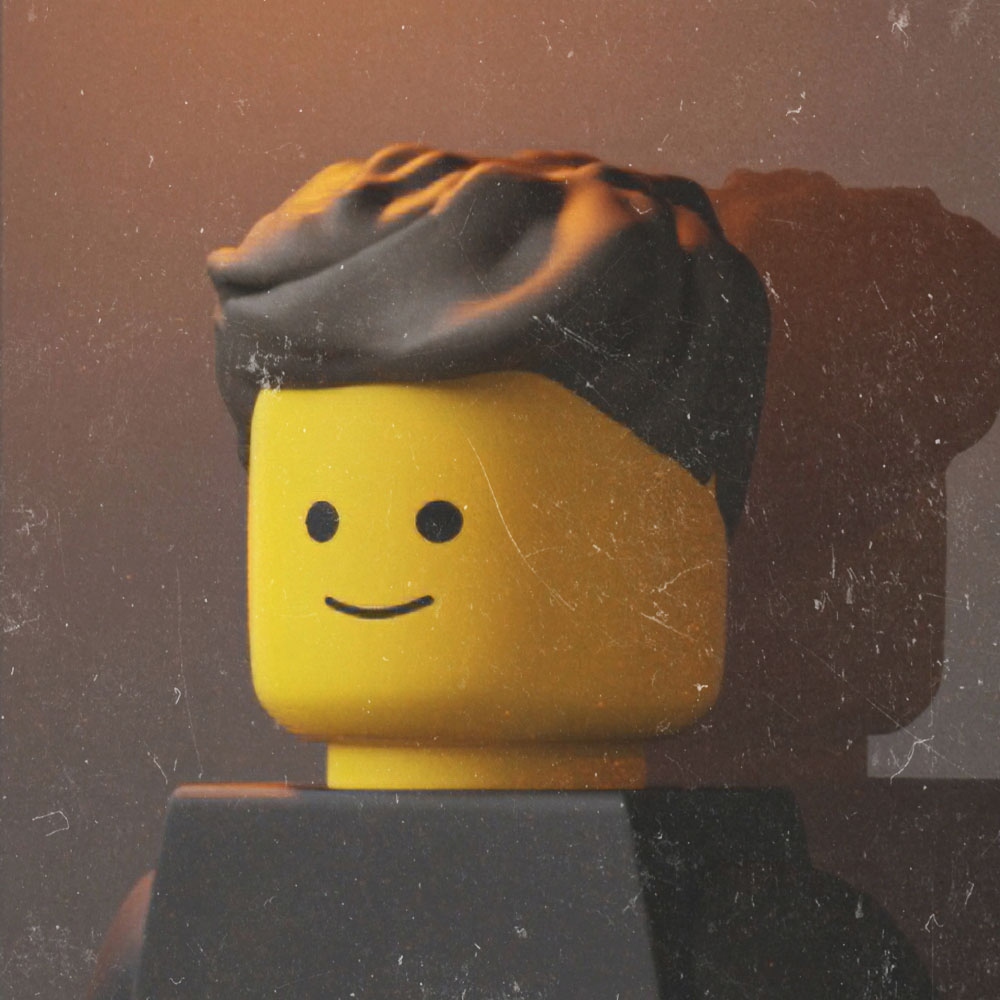 Formerly a partner at FCB Studios, Tim Hall went on to set up Light Earth Design alongside Peter Rich, Michael Ramage and Ana Gatoo. As pioneers of Sustainable Technologies and Green urban Design, the practice combines architecture, design and engineering to explore sustainable design solutions that contribute to societies’ future development. Tim has taught architectural design and has lectured extensively in the UK, Rwanda, Sweden and South Africa. 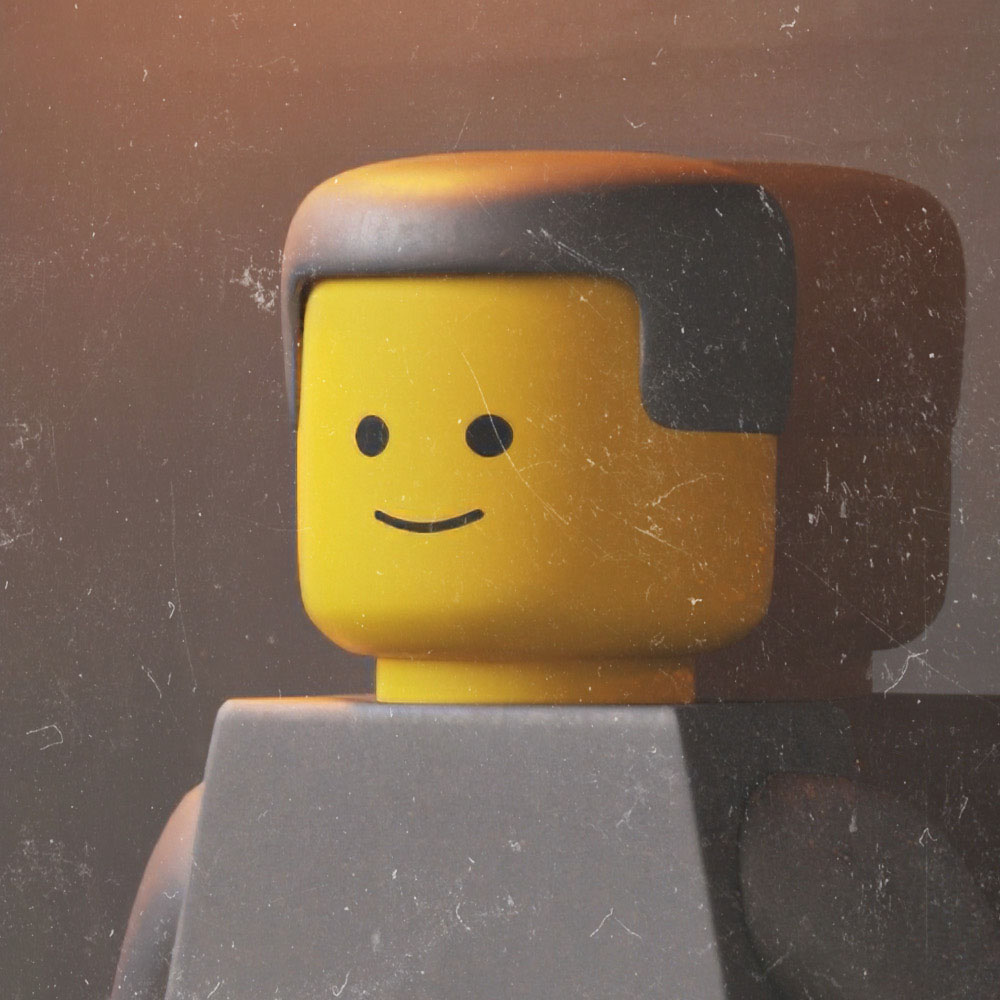 Joe Robson set up Architectural Visualisation practice AVR London in 2006 and has since worked with some of the world’s most influential architects on some of the most striking buildings such as The Shard and NEO Bankside. In 2012 he set up Anise Gallery with his partner Jacky Jubert. The joint venture has rapidly been recognised as one of London’s key galleries focused on architectural artwork.

Together, Joe and Tim will discuss the collaborative design approach used in David Mews and other schemes.

Art Under the Influence – A Panel Discussion

Please join us for

ART UNDER THE INFLUENCE – A PANEL DISCUSSION

On Friday 19 October, alongside Matteo Zamagni’s exhibition ‘Crepuscolo’ we will be joined by an inspiring panel who will be questioning the role of art in our present society and to what extent art can actually influence popular opinion.

The exhibition will be open from 2pm, the talk will commence at 7pm. No need to RSVP. Please note this talk is at Anise Workshop, 27-33 Malham Road, SE23 1AH. 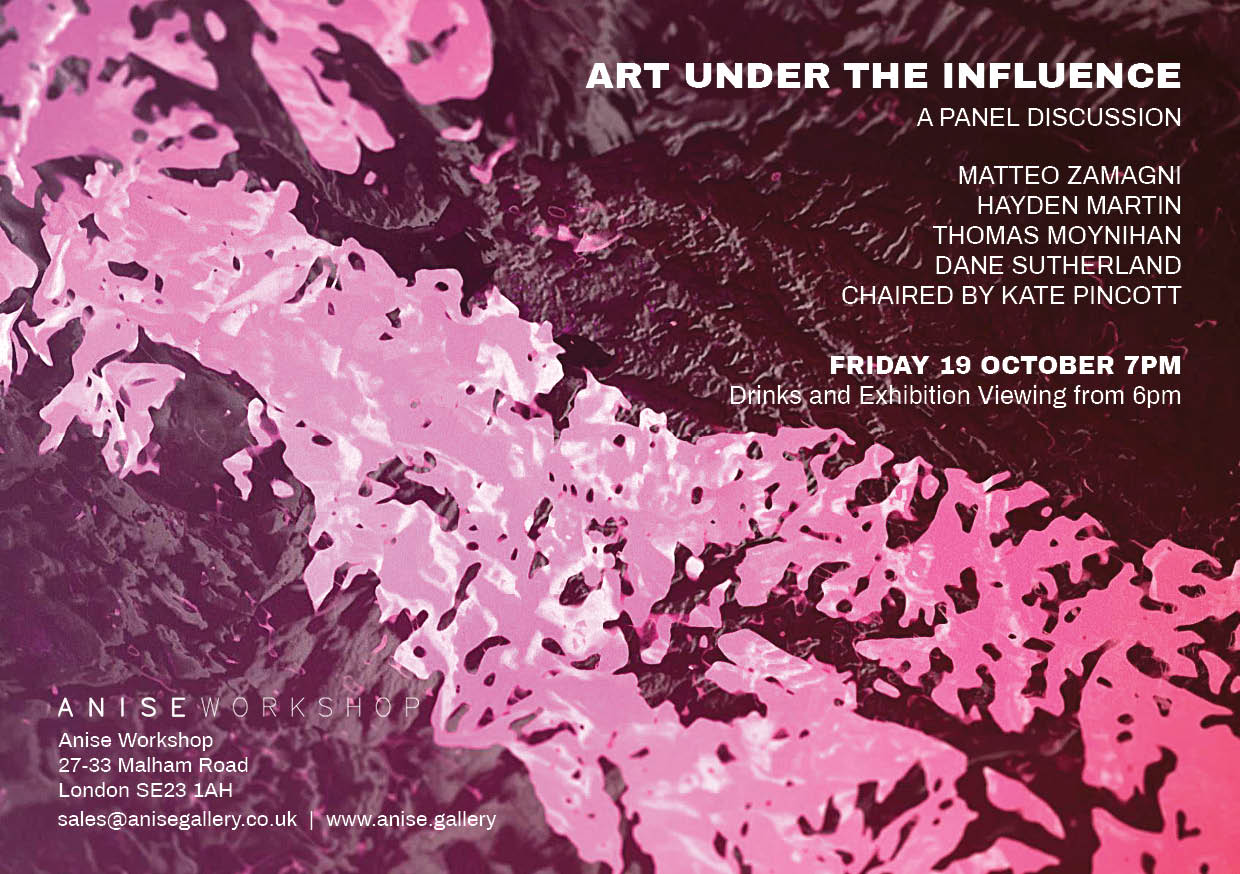 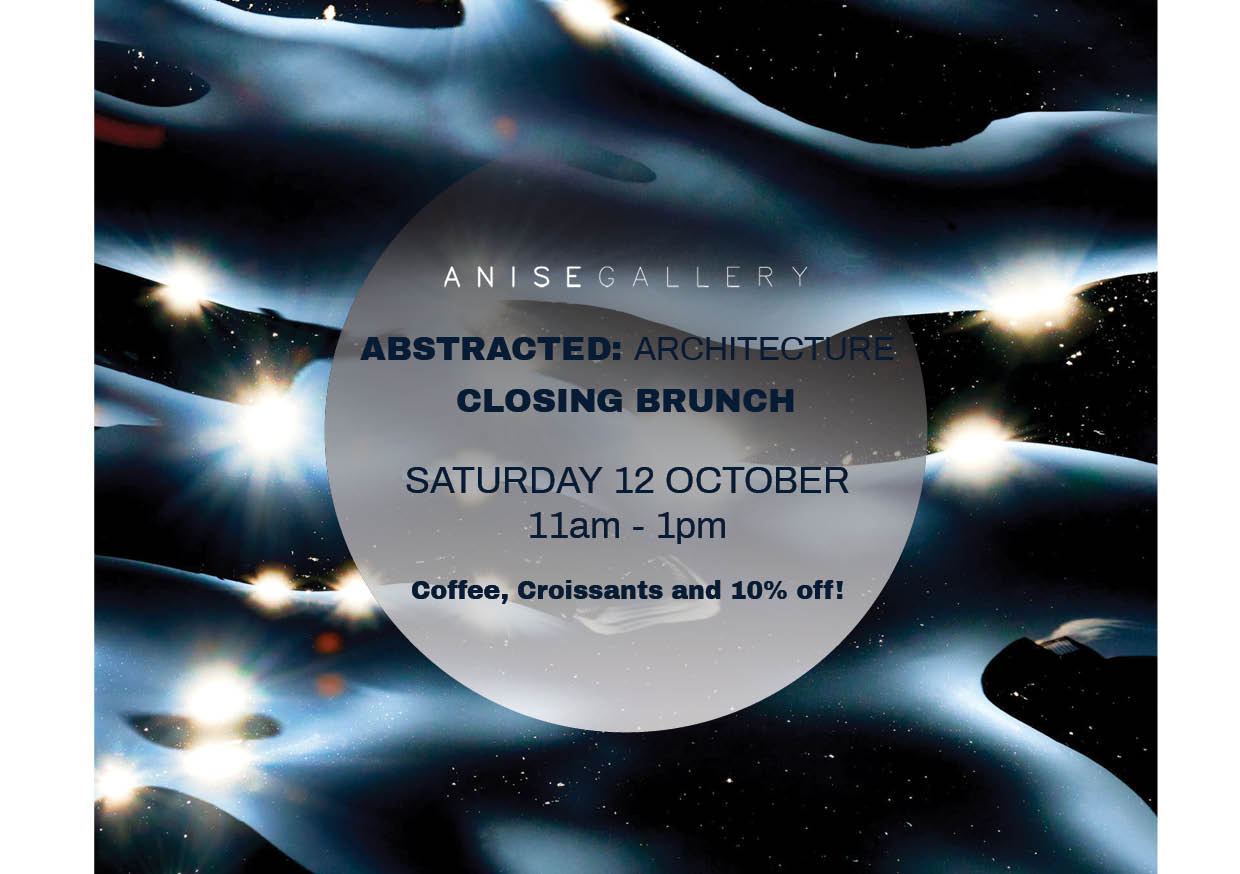 The wonderful Abstracted:Architecture by Mike Curry comes to a close this Saturday. To mark the end of this beautiful exhibition we are offering 10% off all work on Saturday and we will throw in a coffee and croissant too!

We hope you can join us in Shad Thames this
Saturday 12 October from 11am.

This August Anise Gallery will be hosting two events as part of the School of Speculation‘s 2019 public lecture programme.

On August 1st, we will be joined by “post-internet” artist Ed Forniles who will be giving a talk on his latest work which seeks to “disrupt the world of the internet, a world in which today most feel comfortable in.”

On August 8th, we will be joined by interdisciplinary artist Daisy Ginsberg who will be presenting her research on synthetic biology and the design of living matter. You can book tickets for this event here. 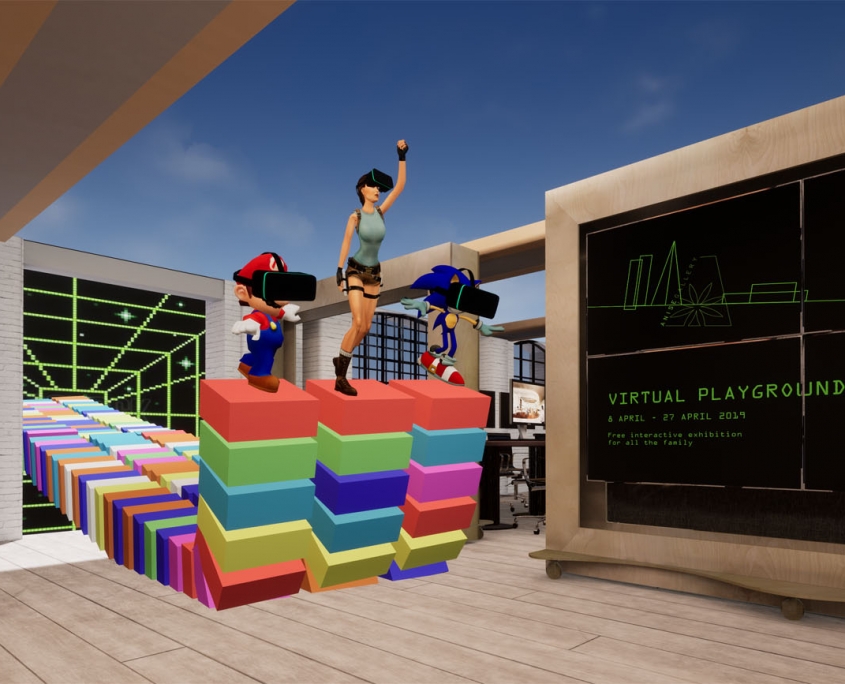 After the success of our first coding workshop we are holding another one on Saturday 27 April at 2pm, the last day of Virtual Playground.

Using Scratch, we’ll run you through the basics, show you how to create your own character, make it move and generally have fun. By the end of the session you’ll be playing your very own computer game that you created.

As part of our Virtual Playground Exhibition there will also be plenty of opportunity to try out the games that are part of the exhibition and the multiple virtual reality experiences.

Please see details of the course below.
Numbers are strictly limited to 8 so if you would like to join us please sign up via the eventbrite link.
Recommended age between 6 and 12 but please do contact us if you think your child will enjoy the workshop and is a different age.

AIMS OF THE LESSON:

COURSE DETAILS:
The course will start at 2pm – please arrive 1:45pm at the latest.
The course will run for approx 1 hour to 1 hour 30mins.
Each child will receive a certificate and goody bag at the end of the course. 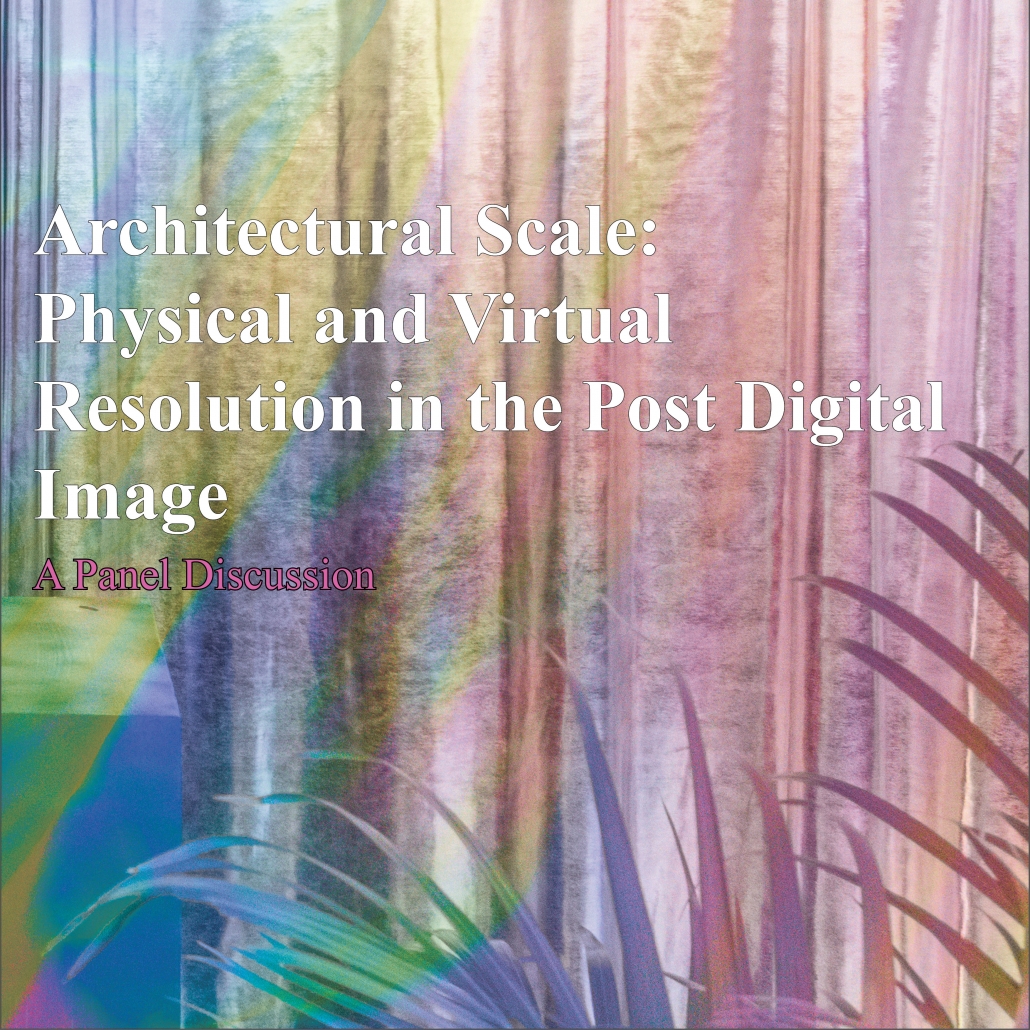 Please join us for our latest talk

We will be joined by:

Mattia, Luigi and Davide : (ab)Normal
David and Daniel : The D*Haus Company – Experimental architecture and design
Joe : AVR London – Architectural visualisation and VR
Herbert Wright will be taking charge of the discussion – we hope you can join us!

Please don’t worry about just turning up on the day though.

We’ll be open from 4pm so feel free to pop by, have a drink and see the current exhibition – Datasutra by (ab)Normal 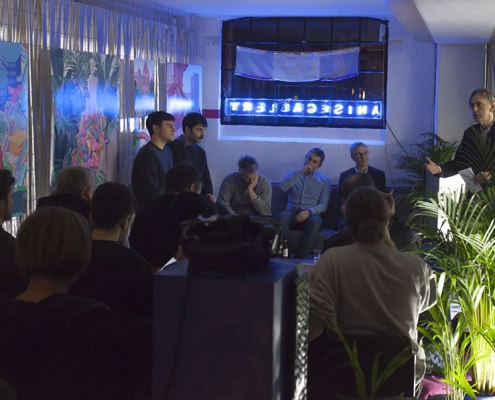 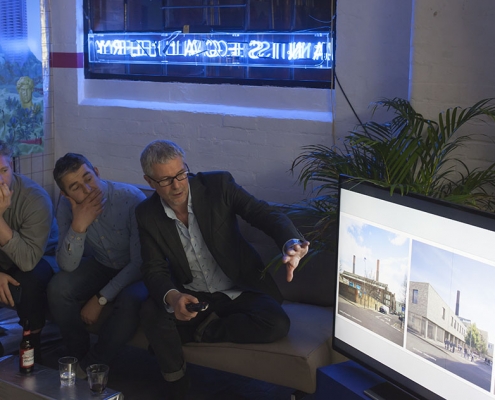 What are you waiting for….

We were delighted to collaborate with Jacek Ludwig Scarso and the Sir John Cass School of Art, Architecture and Design on In Limbo. A week-long participatory experience, conceived and led by Jacek reflects on the meaning of waiting. Take a seat and share with us what you’re waiting for… or simply relax, and just wait.
Taking over the 5th floor of the Blavatnik Building for a week in December we partnered with our friend at  A-VR  to curated a VR waiting room journey which complimented the experience. We hope to take In Limbo to other locations so watch this space! 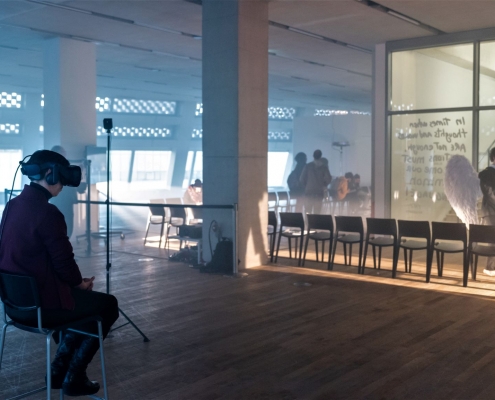 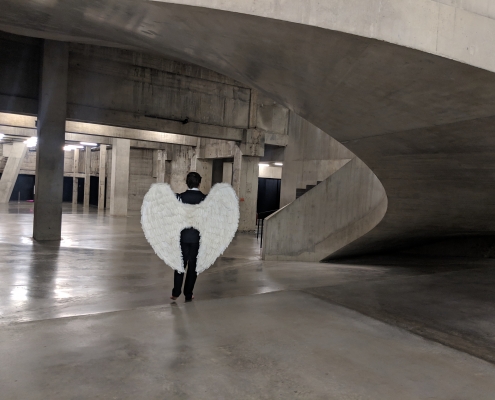 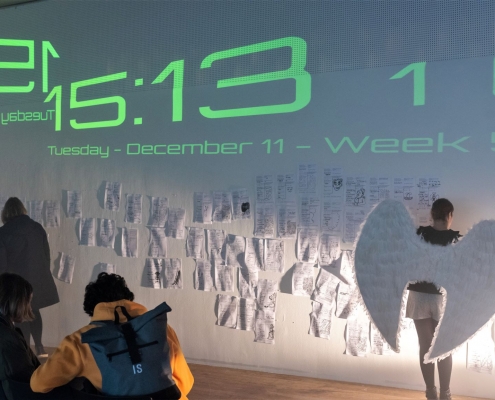