“The sheer ease with which we can produce a superficial image often leads to creative disaster.”
Ansel Adams
A Personal Credo” (1943), published in American Annual of Photography (1944),

In the full context of Ansel Adams’ quote, he compares the ease with which a simple photograph can be produced to the lengthy time and effort put into the creation of a good etching or watercolour. A great photograph however, follows a similar considered, process driven approach as would any etcher / watercolourist. The manner in which Adams mastered his medium, and believed in the depth of the medium, is akin to the artists we have selected for this exhibition; methodical in their approach, the resultant work is a product of their obsessive meticulous processes.

Ben Johnson’s large scale, intensely detailed cityscape paintings are world famous. Depicting the minutest of detail, through the most exquisite stencilling work, the pieces are a testament to Johnson’s dedication to the medium and his subject, however long it takes. Historically, drawing has been fundamental to the paintings, carefully considered line work forming the foundations. Evolving over time, Johnson’s drawing process now incorporates elements of the digital alongside the hand drawn. Many works for example have resulted from the construction of a three dimensional model which explores the underlying geometry of a space. Although painting remains Johnson’s primary medium, he has become increasingly obsessed with the process of line, gesture and mark-making.

Ian Chamberlain and Frea Buckler have, through experimentation and research, pushed their processes of etching and screenprinting respectively in new specific directions producing innovative works that stand out in the long history of printmaking.

Chamberlain’s familiar copper plate etchings are the product of carefully constructed processes that have been perfected through iteration after iteration. Similar to Johnson’s work there is an important stage during the process where pencil is put to paper, to understand the subject, to realise contrast, texture and line. We are delighted to be able to exhibit these preparatory drawings for the first time, many of which were the precursor to some of Chamberlain’s key works which have been subsequently exhibited at the Royal Academy and Jerwood Drawing Prize amongst others.

In contrast, Buckler uses the printing process as her means of drawing. Adopting a methodical, systematic and precise approach to her screenprinting practice she produces stunning one off printed works on paper. Her finely tuned process, focussing on creating the perfect illusion and perception within her colourful origami-like constructs is a balance in itself between chaos and control. Alongside many exhibitions, Buckler also works on public art projects and commissions such as one recently completed for Facebook.

Tom Radclyffe and Esther Rolinson take a more organic approach to their artistic process. Using line as their tool, the pencil seems to make its own path across the page. Radclyffe produces meticulously hand drawn, imagined cities. With little more than a wireframe plan at the start, the process is in the spontaneity as the landscape of the city discovers itself. Spontaneity however would often imply quick, but Radclyffe’s drawings are anything but, most of them take months to complete due to the intricate nature of his drawing.

Rolinson has a meditative drawing process, using it to narrate the sensations and movement structures of her own experiences and transformative states of being. The repetition of lines and rhythms build up into complex forms that become blueprints for 3-dimensional works. Part of a larger process they are also works within their own right and Rolinson’s drawings have recently been acquired by the V&A.

The work of Jack Latham completes Anise Gallery’s study of process. As a large format plate photographer his work is imbued with the same process driven methodologies as Ansel Adams did decades before him. The projects Latham embarks on are lengthy, highly researched and captured in a careful, thought provoking manner – it is, after all, part of the process. 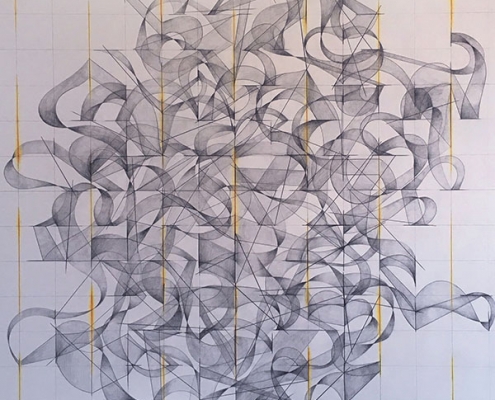 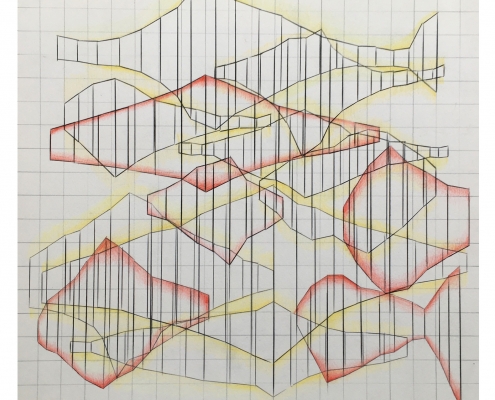 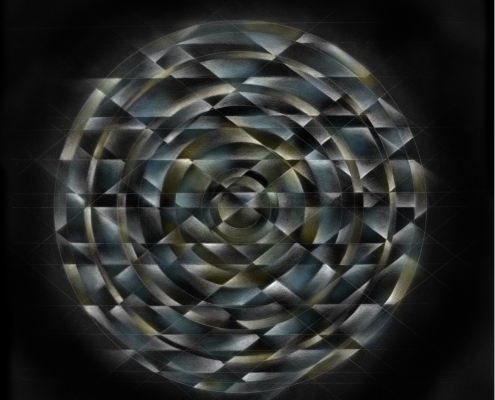