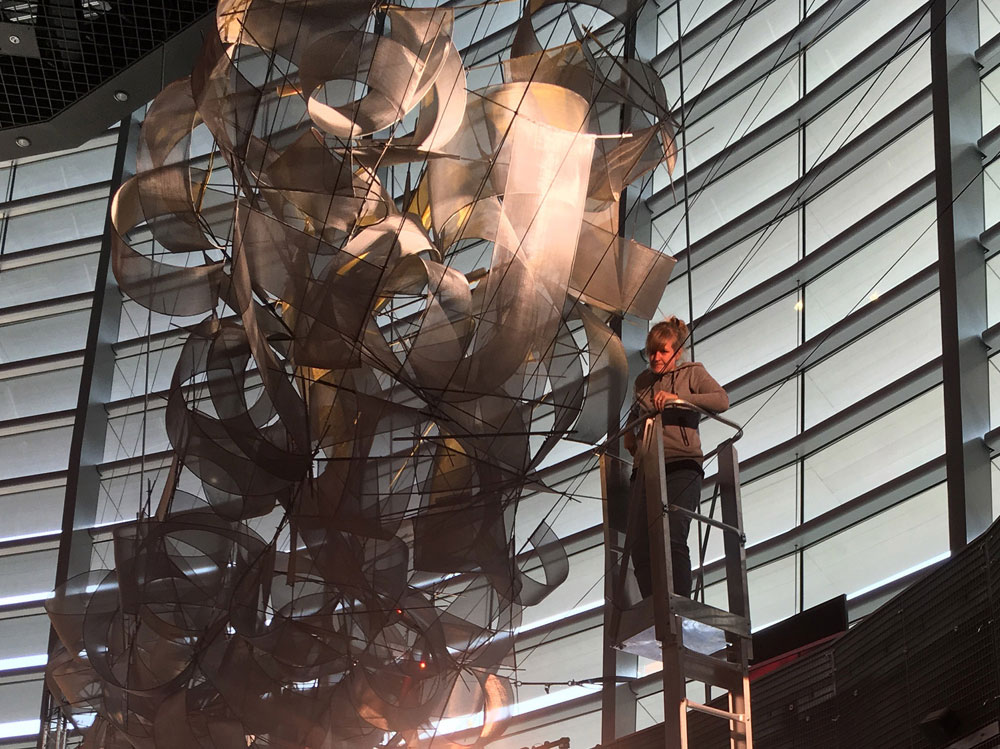 When we think about public art in the UK, one of the first places to come to mind will undoubtedly be London’s Trafalgar Square. From Nelson’s Column to the current occupier of the Fourth Plinth, from street performers and protesters to the National Gallery’s collection, owned by the nation, it is a space defined by intersections of public-facing cultural activity. But elsewhere, forms of public art do not always share space with such ease, unsettling our understandings of who art is for and what its purpose is.

Graffiti is a form of public art that remains a scourge for local councils whilst some works may simply exist to lubricate the flow of consumerist activity in city centres. Some works enchant and reimagine public space, evoking a sense of wonder out of the everyday, whilst others provocatively disrupt the day-to-day routines of a city’s visitors and inhabitants and purposefully create discomfort.

In every instance, the production of public art is not an easy task. More often than not, it is something that is fought for. Coinciding with Esther Rolinson’s meditative Shad Thames installation, Ten Thousand Thoughts, this talk will ask what it is to win and lose in the realm of public art — and wonder if, in the end, the best result is just to draw.

We will be welcoming Esther Rolinson, Mark Davy and Zarah Hussain to the gallery to discuss the importance of public art, our shifting understanding of what “public art” is, and the difficulties that face it at present.

Esther Rolinson is a British visual artist who explores the use of new media technology as well as drawing and sculpture. Over the last 20 years, she has worked nationally and internationally, making permanent and temporary public space commissions.

Due to its immediacy and potential to affect our senses, light is an important feature of Rolinson’s artistic production, one among a wide range of materials that she uses. Another key element is computer programming. In her work the use of new media is as essential as pencil and paper.  Most of her artworks start as drawings made by hand. In a sophisticated gesture, she constructs complex systems and forms that she later extends into three dimensions in her installations.

Rolinson was born in 1971 in Coventry, and lives in Hastings, South-East England.

Since Mark launched Futurecity in 2007, he has overseen 76 Public Art Commissions and worked with 150 Artists and cultural organisations. Recent projects include the Illuminated River Project with artist Leo Villareal, the Crossrail Culture Line which will see 10 artworks embedded into 7 new London stations, artists include Spencer Finch, Douglas Gordon, Kusama and Michel Rovner.

He developed the strategy for the Sculpture in the City programme and set up Future Pace which promotes art and technology outside of the gallery. New commissions include Conrad Shawcross installations in Greenwich and Chelsea, a Random International reactive work on the Embankment, a major arts programme for the Guys Cancer Research Centre and a monument to Alan Turing by UVA in Paddington. He has championed the role of artists in having a greater role in the design of our cities.

Her most recent project, Numina, was a large scale sculpture with a digitally animated surface. Commissioned by the Barbican for their foyer spaces programme in 2016, Numina combined designs found in the art of the Islamic world with contemporary digital arts by mapping animated geometric patterns onto a pyramidal wall sculpture set in a hexagonal grid.

Anise Gallery at the Tate Exchange

Egress: On Mourning, Melancholy and Mark Fisher BY Matt Colquhoun
Scroll to top